Point Blank is another First Person Shooter (FPS) game that has taken a lot of attention in the world. This game’s tournament has also been becoming one of the awaited tournaments which are obligated to be watched by FPS gamers. Nonetheless, still and all, if you are still a newbie and wanting to know more about this game, you cannot learn by only watching the tournaments, but also learning some important stuff related to Point Blank such as the WEAPONS!

Talking about FPS game, the weapons are one of the most influential things that you need to understand about. However, as with other FPS games, the use of the weapons on Point Blank is also limited. You need to purchase some weapons with a determined price that for some people, is sometimes too expensive.

Nevertheless, this time, you do not need to worry anymore because we will share to you a list of the cheapest weapons on Point Blank. Are they the worst ones? Nope. Even though they are the cheapest ones, each of them has good and powerful attributes that can help you much during the game. Here is the list! 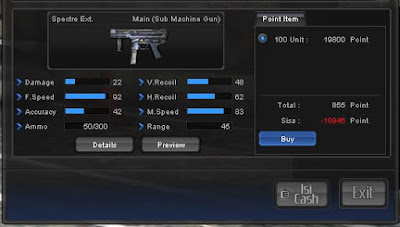 If we are talking about the cheapest weapons on Point Blank, Spectre Ext. will be coming first on the list. Spectre Ext. is one of a powerful weapon that can be bought for 19800 points. Needless to say, for that price, you cannot expect anything but its Fire Speed. Yes, even though the Damage is really extremely low that it can only reach 27%, the level of the Fire Speed can be up to 92% with 42% of Accuracy. Besides, you will also get 50 bullets in one reload. Therefore, even though this weapon cannot be used for killing the enemies fast, it can be the best tool for defense. 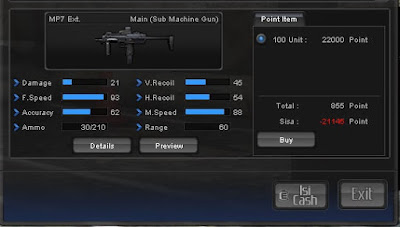 Coming to the next cheapest weapons on Point Blank, MP7 Ext. is another one that you should not ignore. As written before, this weapon can be bought for only 22000 points. Although the price is more expensive than the Spectre Ext., the Damage you can make is a bit lower, it is only 21%. However, its Accuracy and Fire Speed are set for 62% and 93% for each. In addition, it does not come as a surprise that this weapon has ever been claimed as the best weapon for a headshot because this weapon can easily be directed to the enemies’ head. 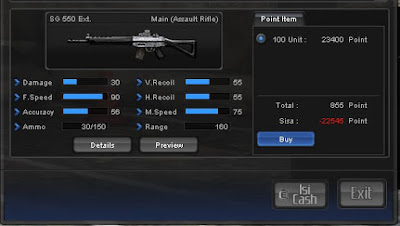 The SG 550 Ext. becomes one of Point Blank weapons that will suit very well with the combination of the Weapon Reaction as well as MP7 Ext. As this weapon is more expensive than two others above, the Damage you can make is also higher, it is 30%. However, Fire Speed and Accuracy are still below the MP7 Ext.’s, they are only 90% and 56% for each. Nonetheless, what makes this weapon very effective is that you can use the SG 550 Ext. for any kind of attack in any range—either a short or a long distance attack. 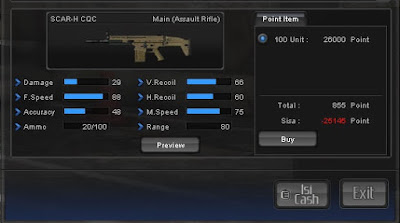 Compared to the three cheapest weapons on Point Blank above, SCAR-H CQC may be the strangest one. SCAR-H CQC is one of underrated Point Blank weapons which can rarely be found in Point Blank battles, but still and all, this weapon is very powerful. SCAR-H CQC has a quite similar Damage—compared to others, it is up to 26%. Besides, the Fire Speed set is only 88% but a high Recoil that is set to 66%. Nonetheless, as with the previous weapons, SCAR-H CQC will be very effective and strong to be used together with the Weapon Reaction. 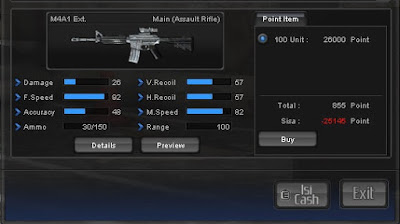 The last weapon in this list is M4A1 Ext. This weapon has also been being attractive for those players who love to attack in a short distance. The specification of it is not really different from the prior weapons though. It has 26% Damage but it also has a great Fire Speed that is set to 93%. With such a range of Damage, once again, you cannot use this weapon for a long distance attack.

Good gamers, those are all the cheapest weapons on Point Blank that are recommended to be used for your gameplay. If you have another suggestion, you can also share yours on the comment section below. Have a great game!

Point Blank: Which Weapon Suits You?

Playing Point Blank in a Low Spec PC: What Should You Do?

Zahra - October 15, 2018
0
League of Legends is claimed as one of the most legendary MOBA games that ever exist in the world. This game employs many attributes...

Get to Know League of Legend’s Amumu, the Unbeatable Sad Mummy!

Choosing the Best Weapons for PB’s Sniper: A Guide

Get to Master the Best Assassin Champion: AKALI!

The Best PUBG Spots to Loot